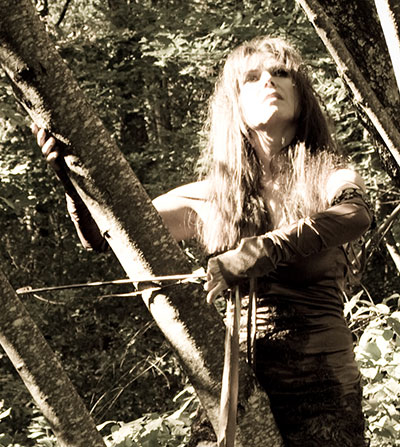 In January of 1959, Janet was born to Martin David and Marizona Robinson.  Home was an amalgam of religious fervour and troubadour outbursts.

On their Tennessee farm, Pentecostal hymns rivaled with top 40 radio. The piano was routinely plunked by an aspiring but non-academic young Janet, and on Saturday nights, the voice on the radio was her father’s, known as the legendary Marty Robbins.

Marty was a trailblazer. He topped the pop charts and brought his southwest roots to the country scene of Nashville and became a country western music legend. He raced cars, grew a mustache to die for, and told his daughter to stay out of the music business.

Which for the most part she did.

Captivated by the music of the tumultuous sixties and the British prog scene of the early seventies, Janet developed her sensibility to weave the textures of her classical music training with the turmoil, art, and theatre of that era.

A natural hermit with a penchant for rebellion and craving for the west, Janet made her way to California and chose the route of an independent artist to explore her creative vision unhindered by the limitations of the mass marketplace.

Playing and composing in bands, she relished the possibilities of self-producing and recording so teamed up with a band-mate to record All the Worlds in the early 90’s; sonic textures of layered vocals, west coast guitars, and heavy atmosphere.

She soon discovered a different compositional voice in the creation of atmospheric soundscapes that incorporated her vocal and instrumental talents as well as the diverse infusions of her spiritual sojourns. This new musical direction led to her three CD series, Carrying the Bag of Hearts Interpreting the Birth of Stars, and was followed by the critically-acclaimed Song of the Gypsy Tree.

Her latest release, I Hear Crow, a collection of improvised ‘compositions’, recalls the soulful solitude of winter, and points the way to a set of string and voice improvisations in the wings to be recorded.

It’s the thread of the sacred in Janet’s roots that inspires her to use music as a tool to evoke, awaken, and feel. Immersive installations in various towns created an experience of imagery, music, flavors and scent, providing a free space for people to come in from the outside world, slow down and dig down deep into themselves.

Through house concerts, video installations and collaboration with other artists she reaches for the power of music to bring people together in the communities where she’s lived.

Maybe it’s this unique combination of voice- the musical, the mystic, the sacred – that led her to pull up roots once more for a place known for all three, Glastonbury in Great Britain. With an infectious laugh, the secret of the will o’ the wisp and her Alaskan Malamute-Husky, Max, she takes the next step on a unique journey, soaking up the old world to give her new world voice new colors and textures.

But as always, it remains Janet’s voice.